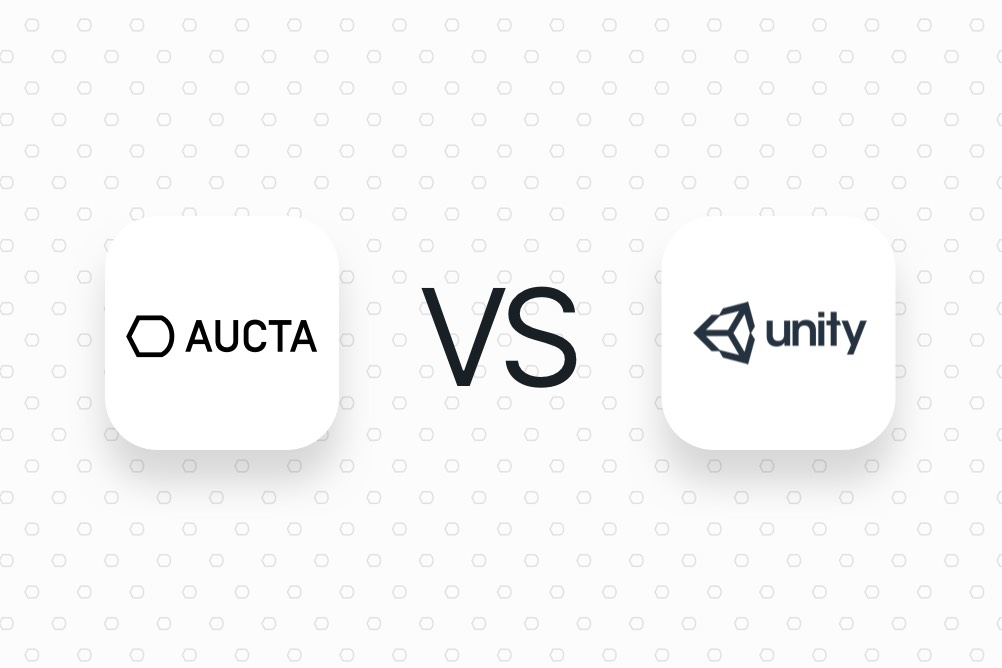 Unity is a gaming engine with a plethora of functions and capabilities. In our comparison, we compare Unity in the context of being a technology to create Augmented and Virtual Reality apps to understand their differences.

For those who are not familiar with Unity, it's a gaming engine that allows developers to create highly functional and interactive 2D and 3D simulations (or games) for any platform.

Unity delivers to a platform through a specified "build" as a native application. This application then requires an installation on the users device.

If you want to create a Virtual Reality application in Unity you will face no limitations. You can literally do anything you desire with the endless possibilities of the engine. Unity VR applications can range from heavy simulations including real-time connections to Augmented Reality applications for smart phones. 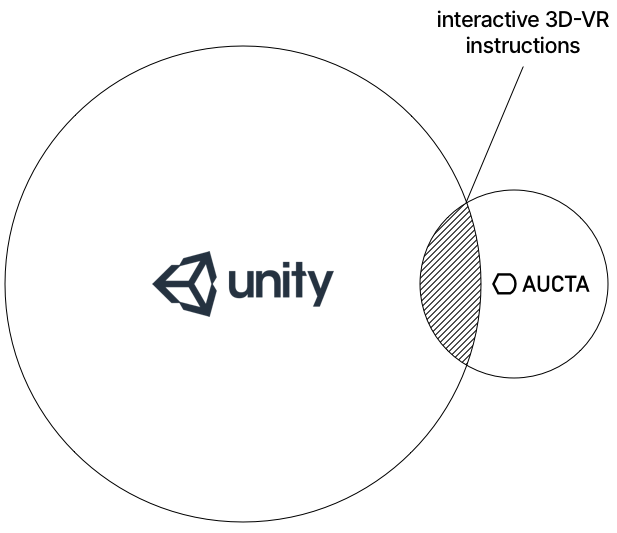 While one platform can do a lot of things, the other (AUCTA) can do one thing very well.

Unitys endless possibilities don't only have benefits: Software developers who have worked with Unity know: It's a beast. It's a beast that hasn't even been invented for Augmented and Virtual Reality, it just happens to be able to be the "least worst" platform to create any application for AR and VR.

AUCTA on the other hand can't to nearly as much, but is highly specific: You will be able to create interactive 3D-VR experiences in AUCTA in a step-by-step format, everything else is either part of the development roadmap or it won't be possible with AUCTA.

Check out one of AUCTAs demos to understand what AUCTA can do. 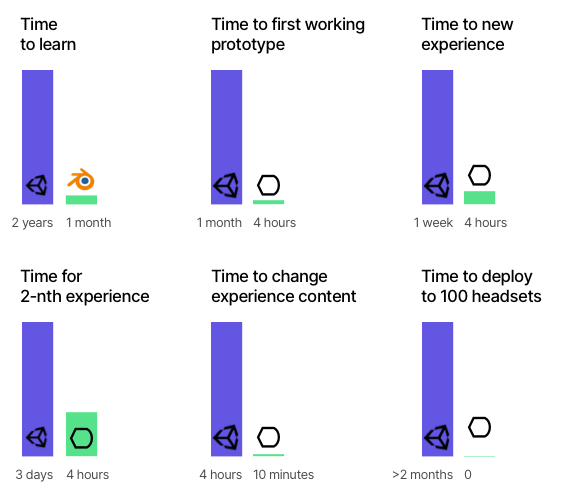 Creating a first functioning and valuable AR/VR prototype in Unity can easily take a couple of months and requires highly skilled software engineers. Unity in combination with C# is a beginners software developers environment and requires years to reach an intermediate level.

For the very first creation you'll likely deliver to AUCTA 100 times faster – given the case you want to create interactive 3D-VR experiences within the constraints of AUCTA.

Because Unitys lack of optimization for AR/VR creation and deployment, there are many solution providers who build frameworks and SDKs ontop of Unity to reduce the creation cost and time. Those "addon-technologies" won't come close to the cost-creation efficiency AUCTA can provide.

AUCTA requires intermediate Blender knowledge that can be learned from scratch in 1 month.

Today there are around 3 Million professionals using Blender.

Both Blender and Unity are huge ecosystems with Millions of users and seem comparabily large.

However if you ask yourself the question: "Can a Unity Developer develop for Virtual Reality" the chances are not very high: Unity is so broad with tons of different types of types of professionals working in and into Unity that only a subset of these active professionals could theoretically develop a Virtual Reality app for you.

With Blender and AUCTA it's different: AUCTA has seperated code and content creation as a design principle requiring no coding from any 3D professional creating content.

No required coding significantly drops the complexity barrier of entry for creating anything with AUCTA.

From our experience we know that nearly every professional in Blender can deliver AUCTA-ready experiences in just a few hours of learning, meaning that you will have access to a high pool of experts.

This Blender <> Unity comparison should not be weighed too hard for 2 reasons:

Unity allows you to create a native application on a specific device. Manual app (or "build") installation is required and can be an intensive manual task. 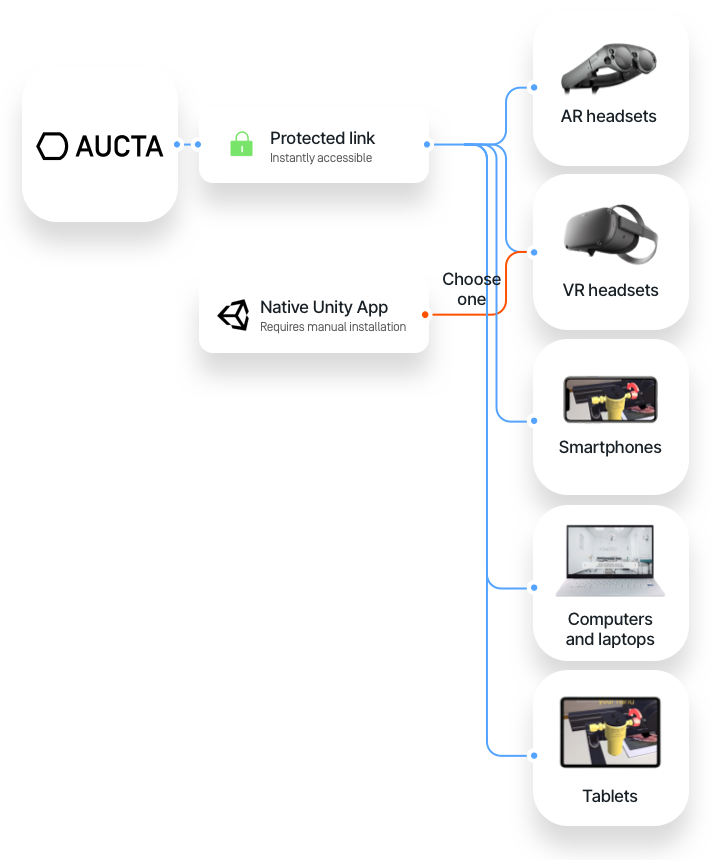 Once an AUCTA instruction is created, it will automatically work on all tablets, smartphones, desktop computers, Augmented and Virtual Reality headsets. AUCTA detects the environment and provides a full immersive mode in VR headsets or AR head mounted displays.

AUCTAs fundamental technological approach through WebXR cannot be beaten by Unity based app deployment as a short link is always easier within reach.

OpenXR which is maintained by the Khronos Group will help Unity based applications to individually deploy to hardware devices and environments that support the OpenXR standard. However this doesn't mean Unity based applications can become device agnostic in the near future. It will still mean a custom deployment for every environment and all the overhead that comes with that.

On the right side of the Khronos OpenXR graph you can see how OpenXR will and enable more devices to selecct ouf of Unity/Unreal in the coming years. AUCTA has this device and platform agnostic capability by default.

To not drown in endless costs, Unity will force you to optimize for a single device. A good example of this is the company Deutsche Bahn which bases its technology stack on Unity for the HTC Vive VR headset for all VR based learning.

What if HTC Vive goes bankrupt or fails to deliver a follow-up product fast enough? Years of development at stake.

What if another VR headset becomes a much better viable option for scalability? Choices have been made...

What if the organization identifies high potential for head-worn Augmented Reality and wants to move in that direction with the same content and software? Unless high reinvestments are being made, no simple way to do that.

Nobody today knows how Unity, how VR manufacturers and the XR ecosystem develops.

In Unity, updating your application on installed devices requires manual reinstallation. Decentrally organized enterprises need up to 12 months to roll-out such an update. Effective teams should perform such a roll out in a few months.

In AUCTA all content is accessible through the web and therefore can automatically be updated instantaneously.

Once content is created for AR/VR a relevant question is how content can be updated easily. With Unity: Unless you're a developer, you can't.

AUCTA offers the content management system "Manager" through its web platform allowing anyone to update content and meta-data instantly.

Best-practise in VR application creation via Unity shows that most scenes are assembled within Unity. Exporting assets and scenes out of Unity into other environments (AUCTA, PLM System, 3D PDF, LMS, Unreal...) will not automatically work and is labor intensive. 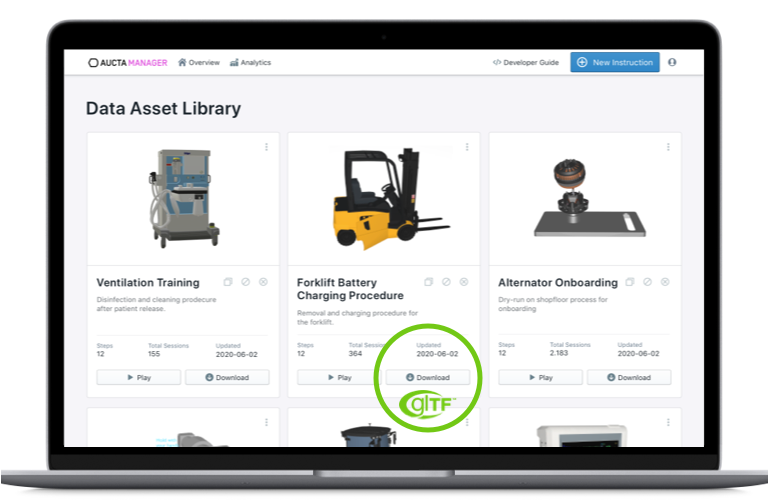 AUCTAs approach to cross-solution synergies lies within the use of the open GLTF data standard, the "PDF for interactive 3D". A fully assembled "AUCTA file" still consists of 3D data combined with meta data, but still these GLTF files contain a significant amount of information itself and can always be exported for other applications or environments to be repurposed putting the risk for the buyer to a minimum. 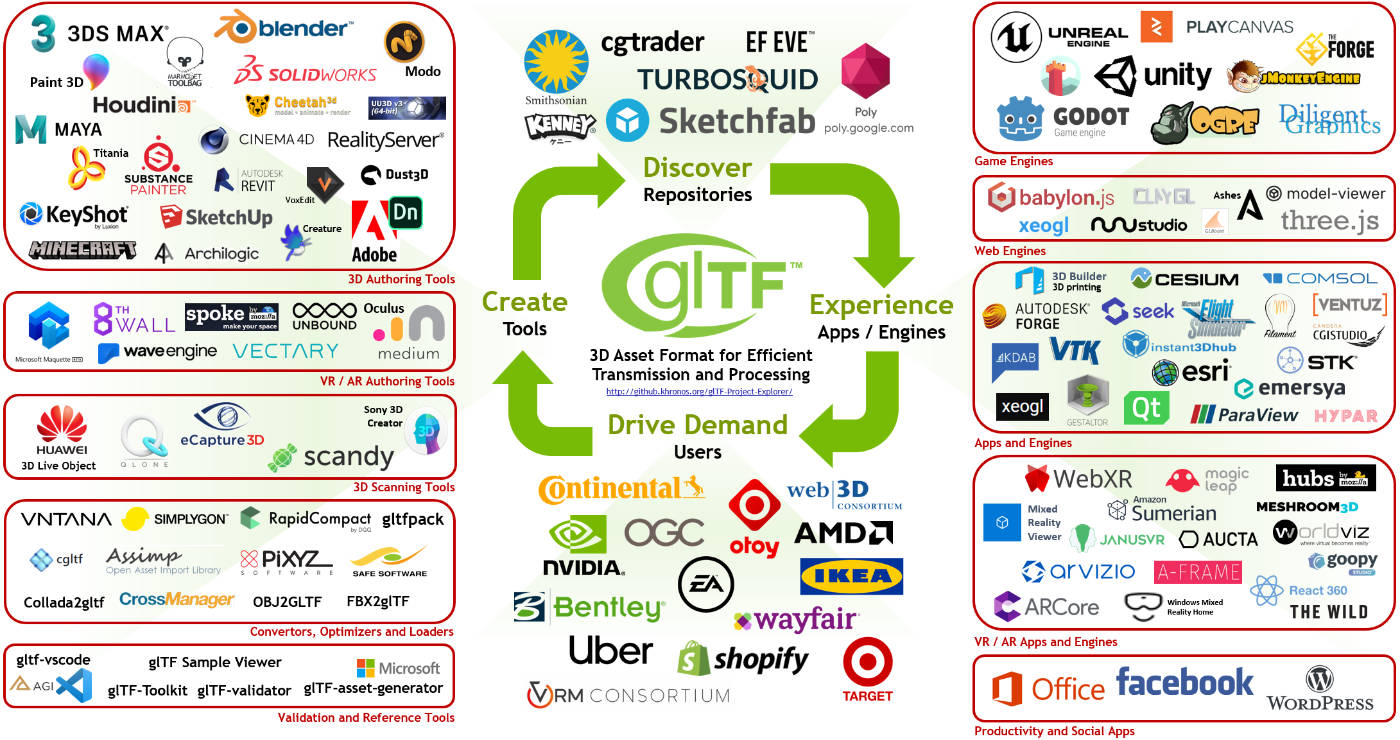 GLTF is the PDF of interactive 3D, Source: Khronos Group

Unitys pricing is free unless you intend your created solution is also marketed and generates a significant revenues. Then they will take a share of those revenues.

AUCTA offers custom creation services with a transparent price tag based on "steps" for customers who want to work with AUCTA for content creation instead of insourcing.

Learn more about the cost of virtual reality training here

If you need interactive 3D-VR instructions on all devices, consider AUCTA.

Unity can do everything else.

If you want to learn more about what AUCTA can do for your challenges today and tomorrow – our experts are happy to have a personal conversation or you can read more on our website.

We are convinced that AUCTA can create siginificant value for you! Let us show you how to future-proof how you transfer knowledge in your company.